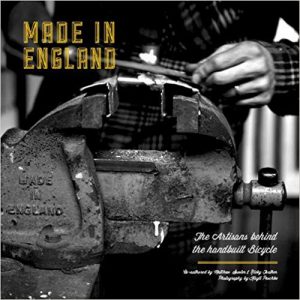 If you don’t already have this book, then you need to get this book.

Made in England: The Artisans Behind the Handbuilt Bicycle

There is a fantastic section/interview with legendary British master framebuilder Ron Cooper, who sadly passed away in December 2012 at the age of 81, and includes lots of photos of his shop and frames, as well as the man himself.

The focus of the book is on “current” (as of 2012) builders, which is why Ron is included; the book also includes Chas. Roberts and Dave Yates amongst other builders I’m far less familiar with.

I would love if someone put together a similar book on British builders of the past like W.B. Hurlow, A.S. Gillott, Witcomb Cycles, etc., but super-happy to see Ron getting the love he deserved. Since the book was published just a few weeks before Ron died, it’s a fitting tribute to a master framebuilder.

From one of the intro paragraphs in the Ron Cooper chapter:

“If there was anyone in this book that we would buy a frame from, it would be Ron Cooper. It would be a track frame, with Ron left to decide how he carved the lugs. It would be a classic, beautiful and elegant bicycle in its simplest form. It would be a keeper, one to pass down.”

There’s not many framebuilders about whom I would agree with that statement. Off the top of my head, I can think of two: Ron Cooper, and Richard Sachs, and thankfully I’m lucky enough to own road bikes built by each of these two gentlemen.