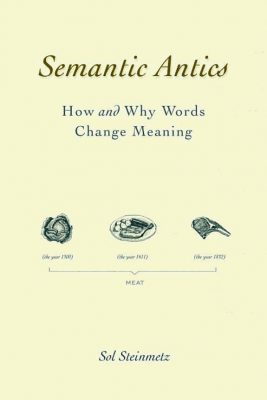 I have a fascination with words, and I love to debate. I can argue semantics for hours, much to the dismay of people around me at times. I’m pretty sure that’s why a friend of mine gave me a book this past summer; because I was driving her crazy with my insistence on using the right words. I wonder if she knows how much I’ve actually enjoyed reading it?

Sol Steinmetz’s Semantic Antics: How and Why Words Change Meaning, published by Random House, “shines a light on the often complex evolution of the meaning of words” according to Jesse Sheidlower, editor of the Oxford English Dictionary.

Before 1400 there was a word in English, awk, meaning “the wrong way, backhanded,” that was of Scandinavian origin, probably old Norse afug. Though the word had fallen out of use in English by the 1600s, it survived as part of the compound word awkward, meaning “turned in the wrong direction, upside down,” literally, “toward the wrong way.” From the idea of doing things the wrong way, a new meaning, “ungraceful, uncouth,” developed, as in Shakespeare’s Troilus and Cressida (1616), where Ulysses says: “And with ridiculous and awkward action … He pageants us.” From this sense came the current meaning, “lacking dexterity, clumsy, bumbling,” applied to persons and things, as in an awkward gesture, an awkward situation. “I have not seen a more clumsy, awkward, and unhandy people.” (Jonathan Swift, Gulliver’s Travels)

Of course, when I whip out this newfound knowledge, people look at me like I’m crazy, which leaves me feeling, well, awkward.