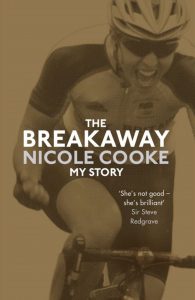 Nicole Cooke is a strong-willed, outspoken iconoclast. Like many top athletes, she knows what she wants to accomplish, and is not going to let anything stop her from achieving everything she possibly can, even if she has to fight the system every step of the way. And fight she did, becoming one of the most decorated female road cyclists, not only in Great Britain, but in the world.

Ms. Cooke’s palmarès as a Elite/Professional rider include a win in the 2004 Giro d’Italia Femminile (becoming the first Briton to win a Grand Tour), wins in the 2006 and 2007 Grande Boucle Féminine Internationale (the women’s Tour de France, now defunct), two overall Women’s World Cup wins (2003, 2006), and several Classics wins in addition to her gold medals in the 2008 Olympic Games in Beijing, the 2008 World Championships, and an incredible 10 British National Road Race Championships (1999, and then 9 consecutive wins from 2001-2009) generally racing as an individual against the entire British National Team whose singular goal was “Beat Nicole Cooke”.

One can only imagine what Ms. Cooke’s career would have been like had she raced with the full support of British Cycling, rather than having to constantly battle her national governing body.

The Breakaway: my story, published in the United Kingdom in 2014, chronicles Ms. Cooke’s career as a cyclist from when she first discovered the bicycle as a youth, as she and her brother accompanied their parents on various tours riding on the back of tandem bicycles, to her successes as a junior, and through her career and retirement as a professional at the end of the 2012 season.

Cooke first decided that she wanted to be a racing cyclist after watching Robert Millar chasing the King of the Mountains jersey on the Col d’Izoard and Isola 2000 in the 1993 Tour de France. Even though Millar was unable to win the stage that day, his fierce grit and determination served as an inspiration for the young girl, who would have to rely on her own determination to succeed when challenging the status quo.

Cooke’s first run-ins with the bureaucracy came at the age of 11, when she was denied the opportunity to race a time-trial because she was “too young”; the only way she was allowed to participate in that very first race was on the back of a tandem being piloted by her father.

At that time in the United Kingdom, juniors were not allowed to participate in a mass-start road race until they turned 17; so Cooke did what many aspiring pro had to do, by going to mainland Europe to race, initially in the Helmond Youth Tour in the Netherlands, a series of races designed purely to teach youth how to read a race and how to use tactics rather than just brute strength to win a race.

At the age of 16, Cooke was already well acquainted with the bureaucracy, but that didn’t stop her from taking on older riders who had the full support of the Federation, and beating them at their own game in the 1999 British Road Championships, her first of many to follow.

By 2002, Cooke was also beginning to discover that when it comes to racing, even on the continent, women were almost an afterthought, not a priority. What was supposed to be her first professional contract, with Acca Due O was rescinded in late 2001 before it could be signed, meaning that Cooke was left scrambling to find a team for 2002.

While she was able to sign for smaller Italian Deia-Pragma-Colnago team, it was for half of the original Acca Due O offer, and still without any support from the BCF which wanted to control every aspect of training and racing for their supported riders.

It was also around this time that Cooke had her first encounters with the dark side of sport as well; first “ciclismo a due velocità” (or “cycling at two speeds”), when some of her fellow riders working with then team manager William Dazzani talked openly on training rides about what drugs they were taking, and then later with unpaid wages as the team’s budget seemed to be backed with little more than air.

Year after year, Cooke kept having to battle the system, both in the UK and abroad in order to continue racing at the top level, and despite her successes, British Cycling kept trying to shoehorn her into their way of doing things, even though Cooke continued to be Britain’s most successful road cyclist of the era. Eventually, British Cycling began to implement programs similar to Cooke’s methods, and has in recent years developed into one of the most successful programs in sport.

One can only hope that other national governing bodies, most particularly USA Cycling also learns by example, and starts to focus more on the development of women’s sport. Based on recent decisions coming out of the Springs, however, it would appear that USA Cycling still has a long way to go.

Originally published in the August 2016 edition of Cycling Utah.