From 2008 to 2014, Paul Basagoitia was one of the stars of the annual Red Bull Rampage, which takes place each October near Virgin, Utah. On October 16, 2015, after a devastating crash in practice, his life changed forever. HBO’s new documentary Any One of Us, much of which was filmed by Basagoitia himself, tells the story of the crash and Basagoitia’s road to recovery from a severe spinal cord injury which left him paralyzed from the waist down. 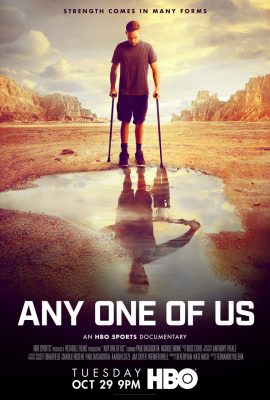 The film, which is due to premiere on HBO on October 29, 2019, opens with scenes of Basagoitia preparing for his practice runs, interspersed with snippets of a number of different people telling the stories of their own spinal cord injuries.

Some were athletes, like Basagoitia. Others were simply people going about their ordinary lives; a mother-to-be getting an epidural before delivering her baby, a woman injured in a scaffolding collapse at a party, another injured in a car accident, a guy playing basketball with his friends, a soldier, along with a number of others.

Basagoitia’s own injury came not after the backflip over a canyon, not after the hip jump, or the gap jump. After landing a 40-foot cliff jump awkwardly, Basagoitia was riding it out when his pedal got caught in the branch of a bush on the side of the trail tossing him over a 5 foot ledge and onto his back, shattering his T12, the largest and lowest of the thoracic vertebrae.

Today, four years after the accident, Basagoitia still has problems walking without a cane, but is able to ride a bike again, albeit with electric pedal assist.

While the film is primarily about Basagoitia’s recovery, the interviews with all the other people really helps put a human face on people with spinal cord injuries; it’s not always about someone doing something stupid and a broken back or neck is the consequence. It can happen to anyone.